The attached file is a python pwntools script, which serves as a skeleton for the solving script:

Executing the python code downloads a binary, which is a PE file.

If we execute it with wine, it takes some time and then a message box pops up with the secret.

So far so good, easy enough. However, after downloading and executing other binaries we can notice a few things. The binaries are completely identical in structure (same addresses for functions or global variables) and only some thing change, such as the big encrypted buffer or constants in certain functions. Some binaries also fail to unpack as their execution is way too long. This looks like an optimization problem !

Let’s load the binary in a disassembler and start at the entrypoint.

The entrypoint of calls a function which returns a pointer to code, and if not null jumps to it.

The checking function first checks that the header is valid, then the other functions are used to VirtualProtect the code, compute the entrypoint and return it.

The header check simply compares the first two bytes of the unpacked code with the word 0x5a4d, which in ascii iz MZ. This is the same magic bytes by which a PE file starts !

Now we know the form of the unpacked code. We can move on to the actual unpacking algorithm itself.

As we guessed that this challenge seems to be an optimization one, we need to see where the program spends most of its time. This can be done by using perf.

This function does a simple check on an input byte array, doing a logical and with an input byte and the inverse of a byte in the second buffer. Let’s keep this aside for now and look at this function’s parent, which happens to be the function called before the checking code). 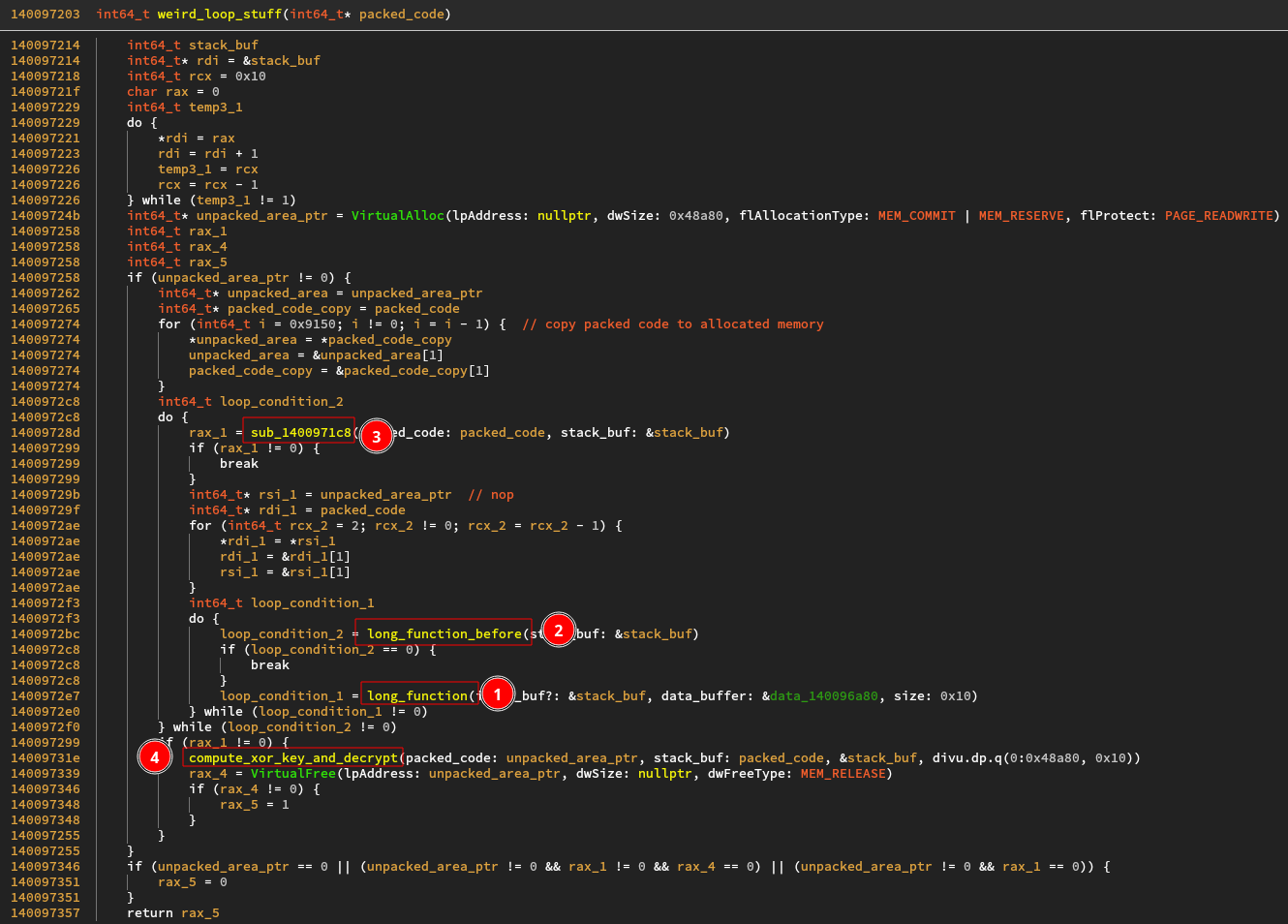 In (1) we have the long function called with a stack buffer and a global byte array. In (2) we have another long mystery function. In (3) is a function wrapping the checking code we have seen earlier. Its return value is used as a check to stop the big loop and enter the actual unpacking process. In (4), the output area, the original packed area as well as the stack buf are passed to the function doing the decryption. 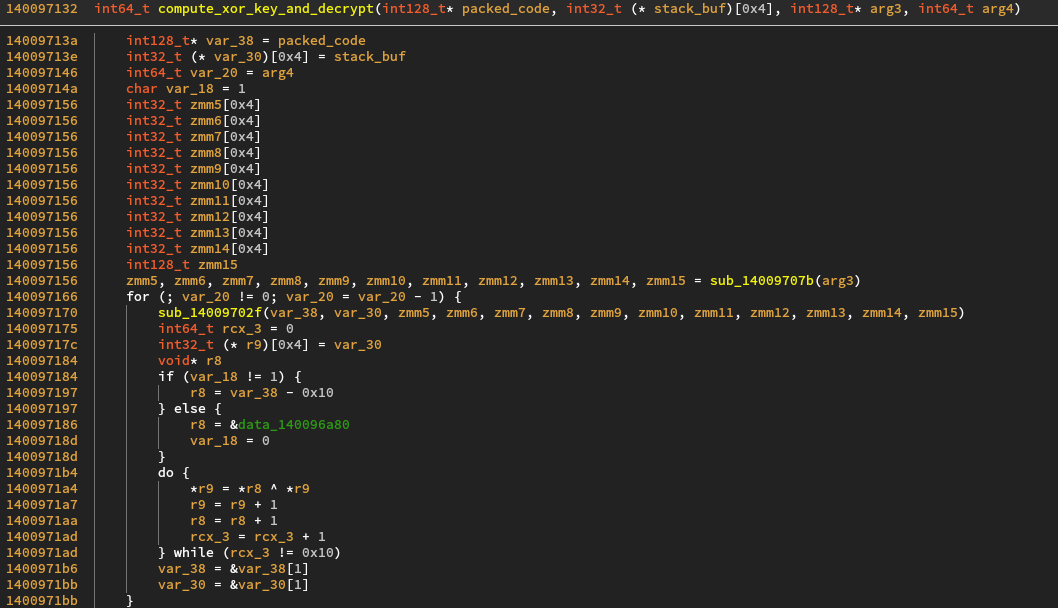 It simply computes a xor key using the stack_buf passed as an argument and decrypts the packed code into the new buffer. The actual key generation uses a lot of aes intrinsics and you don’t want to reverse that, so let’s just not look into it.

From here the issue is pretty clear. The computation of the stack buffer in the big loop of weird_loop_stuff, from which the xor key is derived, is too slow. We need to find a way to speed it up.

The second long function takes the stack buf and iterates from a certain offset, here 0x7 (it changes from binary to binary). It increments the value at this offset, and if it is different from 0xff it returns immediately. Otherwise, it sets the current byte to 0, increments the offset and starts the loop again.

This may seem mystical at first, but what it does is increment some kind of pseudo bignum inside of stack_buf. Calling the function a few times on a number with an offset of 2 would look like this:

The stack buf is then compared in the other long function to a global buffer. In the binary used for this test the value in the buffer is:

We can already notice that the offset at which the incrementation starts in long_function_before is the same as the first non null byte of this global constant. To sum up, here is the stack_buf generation algorithm in pseudo code:

I compiled this code in -O3 using clang and overwrote the long_function code at 0x140097358 with it. Now, as the optimized method only generates valid pseudo bignums, the checking part in main can be replaced as well. 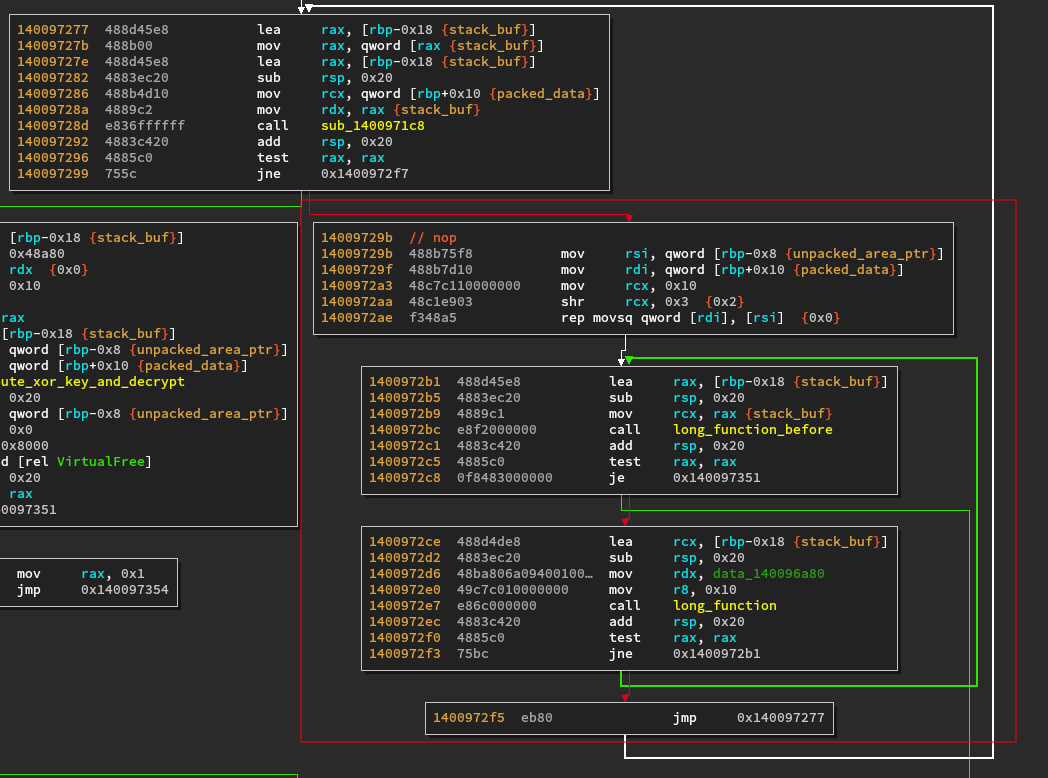 To do this I compiled and patched the code from 0x1400972b1 with the following shellcode:

With these small patches, all binaries, even the longer ones finished unpacking in only seconds ! However, in some rare instances where the bignum was too big I would get a segfault when jumping to the unpacked code.

A few long hours were spent debugging. Somehow the unpacking succeeded, but the output was complete garbage. I started to doubt my implementation and spent way too much time starring at the same 5 lines of code, thinking something was at fault. I even attempted to try my luck with the remote service, hoping it would only send me a long string of non crashing inputs. After a while everything clicked. 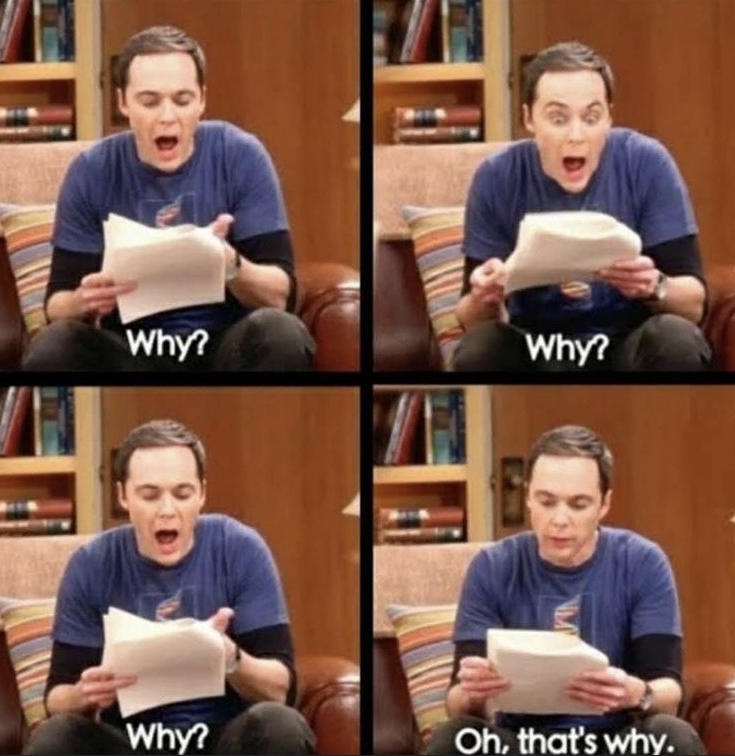 Let’s put the checking function back into focus.

Notice how it only compares the first two bytes with ‘MZ’ ? On bigger bignums a lot of xor key would be generated, which also means that it increases the risk of collision. To only match on a correct unpacking, I patched this function with the following code, checking the first 8 bytes instead of only 2:

This fixed all issues and all binaries could be successfuly unpacked ! All that remains is to programmatically recover the secret.

The secret is being displayed in a message box, which is pretty troublesome for scripting. The exact api call for displaying the message box can be found through tracing wine:

MessageBoxA receives as a second argument the string to be printed. I thus chose to patch the user32.dll in /usr/lib/wine/x86_64-windows with the following shellcode to print the flag on stdout and exit:

The secret can now simply be recovered by reading stdout !

Here is the final solving script:

Running the script gives us the following flag:

This challenge was one my favourite from this year. It is always really fun to patch and repurpose binaries for your own benefit :P.